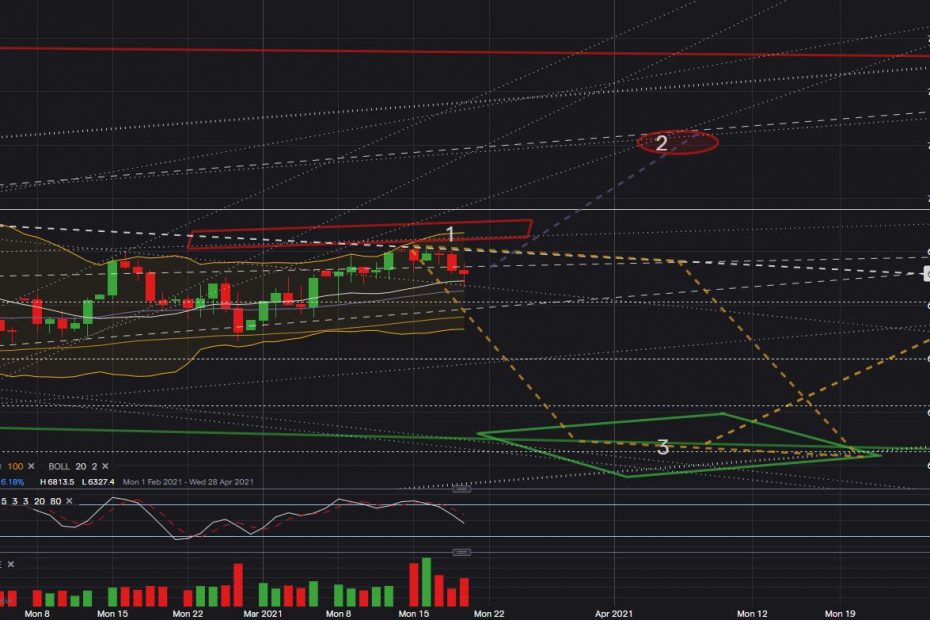 Market Update for the 20th March 2021. In this update we would like to talk more about FTSE scenario 2 but before we do it is important to say that ALL SCENARIOS are still possible but over the next week it is highly likely that we will be able to rule whether scenario 1 is still “on the cards”.

We would also like to reiterate that we do not look at the #FTSE100 in isolation. We look at where long term money flows may move whether it’s stock, bonds, commodities or any form of derivative and how the #FTSE may move with these money flows.

When analysing other markets we can see “nerves creeping in” – stock markets are not retracing “naturally” as there are few other markets for newly created money to “flow into” which will earn a return on capital. This will change when interest rates rise (and they will).

All of our “bigger picture” work shows a change in money flow will occur this year and the 3 most likely scenarios we have show this correction beginning between now and June. We may be incorrect but because we look at a number of markets we are in a “well informed” position. Our analysis therefore enables us to set “low risk” entry points and experienced traders can set a very strong stop/ limit ratio.

Getting back to Scenario 2.

We have a short target zone of 7005 to 7250 to occur early to mid April. This is up to a 7.8% increase in the market in less than a month’s time. This has occurred 12 times in the past 3 years (#GBPUSD adjusted) with most occurrences being in the last 12 months.

Therefore this scenario is highly plausible.

However it is imperative that you understand that most of these rises have resulted in a continuation of growth for several months. As a result, if scenario 2 is hit, traders should consider that scenario 3 may ultimately play out.

The importance of #GBPUSD.

Many FTSE investors and traders don’t appreciate the impact of the #GBPUSD on the #FTSE100. Understanding this is imperative as once you do, you are in a position to better understand if it will cause the #FTSE100 to lag (as it has recently) or whether it will “boost” the FTSE.

If our #GBPUSD scenario (2) holds true then we expect #GBPUSD to fall to 1.34 or below. This effectively gives the #FTSE a boost of at least 2% – depending on what you believe the impact on the constituent companies to be. As a result the FTSE should overperform other stock indices if scenario 2 plays out.

It’s important to highlight that the dollar doesn’t impact other indices to the same extent – e.g. the #DAX where the companies are more “inward looking”.

We are targeting around 4150 for the #SPX in April but we are not convinced that will be a market top and we can certainly see a scenario occurring where this Index is pushed up even higher (after a retrace) to hit a new high in June. This could be a driver for #FTSE Scenario (3) or simply a drag on FTSE Scenario (2) decline.

We see the RUT getting to around 2255 if scenario 2 plays out. Very much like the #SPX it could have another run up towards June (after a retrace).

Remember all of these targets are based upon the FTSE 100 scenario (2) playing out. The reason we are publishing this is the trends and short term cycles on these markets are now aligning very nicely with scenario 2. Currently we see scenario (2) and (3) having the same level of probability as each other.

As always our posts are not investment advice. If you wish to trade or invest based on our analysis you should do so with great caution and consult your financial adviser. Remember never to invest or trade more than you can afford to lose.